The first counties in Pennsylvania were established in 1681 under a charter granted to William Penn by Charles II, King of England. Settlement occurred mainly east of the Susquehanna River until the conclusion of the Indian Treaty of 1736, when the limits of Lancaster County were extended indefinitely westward. These fertile lands were soon occupied by immigrants from England, Ireland, Scotland, and Germany. During the period from 1739 to 1743, a colony of Germans from the Palatinate and a colony of Dunkers or German Baptist Brethren from the Upper Rhine settled in the region of present day Manheim Township

In 1740, Michael Danner, a leader among the Dunkers, purchased from the heirs of William Penn, a large tract of land within the present limits of Manheim and adjoining townships. When the Township boundaries were established in 1747, Danner requested to the Lancaster court that it be named "Manheim " after the historic old town of Manheim on the Rhine. He also headed a petition of German Signers for the organization of a new county seat west of the Susquehanna River and was appointed to a five member commission to lay out the County of York in 1749.

Heidelberg Township, which included the site of the Borough of Hanover and a section of Adams County, was severed from Manheim in 1750. In 1816, in answer to a petition to annex the northern part of Manheim, the Township was reduced to include its present area and that of West Manheim. The formation of West Manheim Township was in 1858.

First settlement of the southwestern portion of York County occurred in and around Hanover with the granting of various titles under Maryland authority from 1729 to 1732. A temporary line between Pennsylvania and Maryland was not established until 1739. A final line was delineated by Mason and Dixon in 1768.

Manheim Township was first established as an agricultural area and has retained this stature even today. In the early years of farming much of the land was cleared of timber, and various crops of wheat, barley and corn were planted. The soil became poor until only buckwheat could be harvested in abundance. When certain fields began to lose their crop yields, they were deserted and new tracts were cleared and planted. However, improvements in farming practices and later the use of fertilizers helped to replenish the farming areas.

The Township developed around two small villages: Marburg to the north and Black Rock located near the Maryland line. In 1792, the first paper mill known to have existed west of the Susquehanna was erected in Manheim. Dub's Mill, situated on a branch of the Codorus near Marburg is one of the landmarks in the southwestern part of the County and one of the pioneer grist mills in this region. 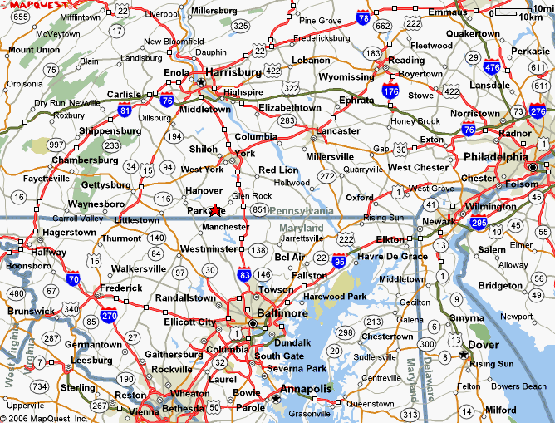